HVAC System Smells and What Causes Them

The HVAC system is arguably one of the most-used appliances in any home. Ironically, it’s also one of the least noticed utilities in any property. We tend to assume that HVAC systems can operate efficiently for months without any serious servicing. Actually, most property owners install and forget about HVAC units until they notice bad smells. It’s a no-brainer, therefore, that most of the queries we receive frequently revolve around how to handle HVAC system smells and what causes them.

So, what are the prevalent AC odors? What do they signify? What causes them? And, how can you prevent or handle them? In this article, we give you an in-depth perspective into all you need to know about HVAC odors. 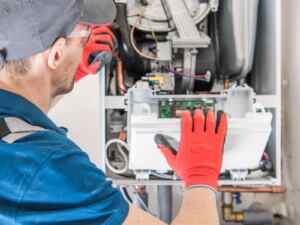 The electrical or burning odor is one of the most common HVAC systems smells. Typically, the unit will emanate a “dusty” smell as though it’s overheating. When you notice this odor, turn off the HVAC before you begin looking for the problem.

Electrical smells mainly result from clogged air filters, which block airflow and cause the electric resistance heaters to overheat. If the air filters are clean, the issue could be a glitch in the wiring or motor. Unless you’re an expert in these fields, trying to fix either of the two can be catastrophic. Therefore, you should immediately switch off the entire unit and call for help from professional HVAC technicians.

Sometimes, an electrical smell shouldn’t be a cause for alarm. For instance, it’s normal for the unit to produce an electrical and dusty odor when you turn it on in the fall after a lengthy period of staying dormant. Such smells result from dust burning off and should be able to dissipate in under an hour. If the odor persists, consider contacting an HVAC technician to check your motor or the unit’s wiring.

Gunpowder odors are pretty similar to electrical smells. They both result from short-circuited boards, fried motors, glitches in the compressor, or a fried motor. If you don’t respond to them in time, they can predispose you to respiratory illnesses. That’s because such smells emanate from the burning of chemicals or metallic substances.

We recommend contacting an HVAC technician to check your unit before turning it back on after a prolonged dormant period. So, you don’t have to guess whether the smell is coming from dust burning off or wiring faults while continually exposing your occupants to potential respiratory hazards.

Exhaust-type fumes are also pretty common AC odors, and they can occur even if your unit is not gas-powered. In most cases, they result from fluid leaks in the AC or other heating system components. The leaking fluid overheats and burns up, producing large amounts of toxic gases. The resulting gases usually have different chemical compositions from the original fluid and are often hazardous to the respiratory system.

To avoid such precarious situations, regularly assess your unit for any leaks. The earlier you can identify and seal them, the better. Also, whenever you detect exhaust-like fumes emanating from your HVAC system, shut down the unit immediately and call a technician.

Does your HVAC unit produce a rotten egg or sulfur-like smell? Unless you have rotten eggs in your home, the chances are that you are dealing with a natural gas leak.

If natural gas is odorless, why do gas leaks smell like rotten eggs? Well, most utility providers add this scent to alert property owners of dangerous leaks. When you detect a sulfur-like smell in your home, do not take it lightly. Such odors call for immediate inspection. Disconnect the gas supply immediately, alert the local fire department, call your HVAC technician, and evacuate the property as soon as possible.

Continuous exposure to sulfur can trigger breathing problems. So, you might want to leave the windows open. Gas is also highly flammable; hence can result in a catastrophic inferno if ignited. That’s why you should evacuate the building.

Another common reason for rotten egg smells is dead animals in the unit’s duct or the property’s attic. So, you might want to check this out before concluding it’s a natural gas problem. If you find a dead animal, contact the local pest control department to remove it.

Every homeowner experiences a mildew-like odor from their HVAC units at one point. The moldy smell is one of the most common but least harmful HVAC system ailments.

So, what causes it? As the unit’s AC is running, there’s a lot of condensation within the system. Without proper drainage, the condensed moisture may slip into the ducts. If this happens continually, the vent will develop perennial wetness and catch mold. Although the resulting mildew-like odor may not be so severe, it lowers the air quality and may cause respiratory illnesses.

You can solve mold odors by locating and removing the mold build-up. Better still, you can contact an HVAC technician to remove the mold and prevent future recurrences.

Poe’s Heating and Air has been providing trusted HVAC installation, repair, and regular maintenance services across the Gwinnet area since 1983. Call us now at (770)-935-4848 for more info or help to sort your HVAC system smells.

Why pay more for the same great HVAC service? Sure, you can call the big franchise heating and air companies, but since 1983, we’ve been helping home and business owners feel comfortable in their own space. From HVAC repair and new system installation to routine HVAC maintenance, we’ll help you with all your heating and air needs at an affordable cost. We even provide emergency HVAC services.

When you need help with your heating or air conditioning, make Poe’s Heating & Air your first call. You’ll be glad you did.

For 3 generations, our family has been helping yours stay comfortable by providing professional HVAC services to homeowners and commercial businesses all around Northern Atlanta including:

Poe’s Heating & Air provides a variety of professional HVAC services around Atlanta including:

We have customers who are thrilled with us all around the northern Atlanta area as far over as Dawsonville, Jefferson, Winder, Hoschton, Braselton, Dacula, Flowery Branch, Gainesville, Lawrenceville, and Athens. Call us when you need professional garage door service.